in Plays
by Lizz Brain
0 Comments
1

“I’m the daddy of the company in that I’m the eldest and I’ve been around the block, but this is my second tour this year. I have a very good relationship with my sofa and it is missing me and wants me back sitting on it and watching Judge Judy,” he laughs, with that unmistakable Lancashire boom.

“I’m also addicted to X Factor,” he admits. “I’ve never been terribly interested in celebrities and what they do, but I’m fascinated in how we’re manipulated by it. I don’t know what we call it reality TV because it’s as far from reality as you can get, but however the programme makers manipulate the stories, it doesn’t make the singers any less talented. That said, I do think Britain’s Got Talent is a better programme because it’s run over a shorter timeframe and there’s such a variety of acts.” 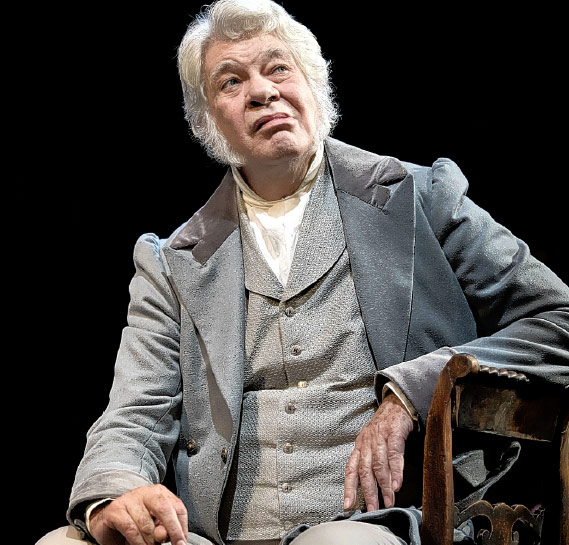 No wonder he’s missing the sofa: but there won’t be much chance to see Saturday night TV for a while (apart from on catchup).
He’s playing Mr Bennet in a touring production of Jane Austen’s Pride and Prejudice until mid-November, before heading to panto in Wimbledon (his son, actor Matt Rixon, is panto-ing in nearby Richmond), and then going back out on tour in Pride and Prejudice again until spring 2017. Matt played alongside him at Curve in 2011, and has been playing Edna Turnblad in the tour of Paul Kerryson’s revival of Hairspray, due to go out again next year.

“I’m very much looking forward to coming back to Curve and it’ll be interesting to play the large auditorium this time around.`` - Matthew Kelly

So with years of TV presenting experience, many more on stage, what drew Matthew to a period drama? “It’s 200 years since Jane Austen’s death but I love this production; it’s so slick and so beautifully-done, there’s 20 of us in the cast and we have this fantastic revolving set – I’m very much looking forward to coming back to Curve and it’ll be interesting to play the large auditorium this time around,” he says.

So last time he was in Leicester it was in Sam Shepard’s Buried Child, a dark, dark comedy about a family hiding a tragic secret. He played Dodge, the father who would do anything to keep that secret buried. Now it’s the pithy Mr Bennett, alongside good friend and fine comedy actress Felicity Montagu (Alan Partridge, Bridget Jones’ Diary) as his on-stage wife.

“She is one of the best things about this production,” says Matthew, “we did a film together years ago called Kelly’s Eye, and it bombed, but she is a brilliant actress who goes for the reality of the role rather than the laughs. Mrs Bennet is an iconic part and it can be played as a clown, but Felicity really shows that she is a desperate woman with five daughters that she needs to get married off because the family estate won’t get passed down as there are no sons. They could all get thrown out of the estate and be made homeless so she really is a woman on a mission. Given that she’s had five children, goodness knows how many pregnancies she had, there’s probably been some depression there too.

“As for her husband, he’s a ladies man who’s still very fond of his wife but he doesn’t love her anymore, although he does love his daughters.

“He’s not the driver of the play, which suits me down to the ground. He just sits and reads the paper a lot, and doesn’t say much – although when he does it’s funny – so everyone else does the work and I still get the money!”

See the original article from the Leicester Mercury, October 8 2016 below.